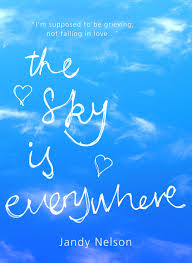 Lennie is seventeen; her mother hasn’t been around since she was one. Being brought up with her Gram and her uncle Big, Lennie and her sister has lived happily knowing that life is good because her big sister Bailey will never leave her. So when Bailey dies from a fatal arrhythmia and leaves Lennie behind her world comes crashing down around her.

Lennie shuts herself off from the world, from her best friend and her Gram. She doesn’t realise that they are as upset as she is, she just sees her own loneliness. Until Baileys boyfriend turns up and they find themselves growing closer in their grief, but maybe too close. Throw into the mix new boy Joe who seems to make Lennie happier than she has been in months, Lennie is hurting more and is more confused than ever but how can anyone help her when shes determined not to let them.

I was warned after I bought The Sky Is Everywhere that it was a beautiful, but incredibly sad book. That is definitely true on both accounts. Lennie is a mess. She is so closed up, she won’t let anyone in, no matter how hard they try. Both Joe and Toby, Baileys boyfriend, seem to want to help but for Toby it results in disaster, with Lennie and him betraying Bailey more than they can ever imagine.

The story is just, amazing, it’s so sad and although I have never been through anything like what Lennie is going through I found myself crying on and off through the entire book. I have a big sister, and we’re close and this book just made me think what I would be like if I lost her, and to be honest… I think Lennie handled it better than I would have done, which is saying something if you’ve read the book!

Bailey was so young when she died and being so close to Lennie it’s not hard to see why her death affected Lennie so much.  Bailey was the apple of her sister’s eye, with no mother it’s no wonder that the girls relied on each other so much.  After Baileys death however, Lennie starts finding things that she didn’t know about. The feeling of betrayal upon finding out these secrets adds to the betrayal Lennie was feeling already due to her sister leaving her. Lennie does come across as a bit selfish upon reflection but because you get the story all from her point of view you understand that it’s the grief overwhelming her which has caused this apparent selfishness.

The plot of this book is incredible, it captures grief and different people’s ways of handling grief perfectly and the way that Lennie handles hers is by writing poetry on scraps of paper and leaving them for the wind to find, amongst other things. I loved the idea of just writing wherever you feel the need, I loved that writing took over Lennie, it was almost as if she couldn’t control her urge to write and it was beautiful.

The book is full of amazing characters who I found myself wishing I knew in real life. Sarah, Lennies best friend, is ace! I loved her from the minute she stepped onto the page! She’s so out there! Then you have Joe, who, being half-French, was always going to be a gorgeous sweetie! I loved him and the relationship between him and Lennie was so perfect.

You also had Gram and Uncle Big who were incredible. I wish I had people in my family like them because even if they were slightly unhinged they were so loving and caring! Gram was totally an all-knowing being and I love it when grans are like that in books because that’s what grans are meant to be like!

The only character I hated was Toby… in a way anyway… it seemed a bit like he thought he was sinking after Baileys death and he wanted to drag Lennie under with him. I just thought he should be behaving better and be more adult about the whole thing, but I guess he was only 19 and had just lost the love of his life.

The sky is everywhere was truly beautiful. I have the blue hardback copy and I bought it on the grounds of its cover and the pictures between each chapter. I don’t know if the paperback will have this but honestly, I urge you to get the hardback anyway! I know you shouldn’t judge a book by its cover, but that doesn’t mean you shouldn’t get the prettiest cover going! And trust me, you have to get this book because it’s amazing. I read it in one sitting whilst everyone else was busy watching the royal wedding and I think I probably cried more during it than I ever would at the royal wedding!

It really does make for an amazing read covering issues of grief, abandonment, family love, first loves and friendships. As well as this you get jealousy and the confusion that takes over you when you’re at a certain stage of teenage life. The book shows that life doesn’t just stop when someone dies and all the rubbish stuff that was on your mind before is still there during grief.

The Sky Is Everywhere is Jandy Nelsons first book. Released in the UK in June 2010 in hardback format the paperback is due for release on June 2nd 2011. Both copies are available here.

There’s an Ouch in my Pouch – Jeanne Willis & Garry Parsons