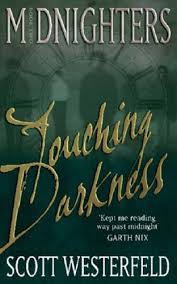 **whilst I usually take the upmost care not to spoil any books for my dear readers I am afraid that this book is the second in the series and it is very difficult not to write about it without giving away the stoy of the previous book; The Secret Hour. If you wish to read the series and want to know what I thought of it please read my review of the first book here. DO NOT READ ON if you don’t want to know what happened.**

“Jessica Day wondered if she’d really changed that much since packing the box in Chicago. Maybe it was getting arrested that had suddenly made her feel older. (Okay, officially she’d been ‘detained and transported to parental custody.’ Whatever.) Or maybe it was having a boyfriend. (although that wasn’t official yet either, come to think of it.) Or maybe it was the secret world that had opened up around her here in Bixby and then had tried so hard to kill her.”

After finding out what Jessica’s powers are and scaring the Darkling’s off for a while the five midnighters hope to carry on their lives pretty much as normal. However after a trip out with Jonathan during the blue hour Jessica and her companion notice a strange figure frozen in the bushes opposite her bedroom window with his camera poised to take multiple images at bang on midnight.

Jessica and Jonathan know in that instance that there must be daylighters who know about the blue hour and with Rex delving into the history of the lore it would appear that the nest few weeks are going to be a struggle for all the midnighters to keep safe.
I loved the first of this series. I couldn’t get enough of it, I even returned it to the library and asked them to get the second one in for me (costing me a whole 60p! lol) and I’m so glad I did. Touching Darkness is a brilliant follow on!
I loved the action in the first book and the second really got my heart beating too. There were scary bits, there were amusing bits and there were definitely sad bits! As with the first the perspective in Touching Darkness is mixed, you get some of the story from Jessica, then Jonathan, Dess, Rex and Melissa.
I liked that this book had more of a focus on the other characters than the first; you get more of a feel for Dess and Melissa, which is good because I really wanted to know more about these two.
In this follow on you also learn more about each of the midnighter’s abilities, which was really cool. I love the idea that the guys have special powers in the blue hour and learning more about them fascinated me. You also get to know Beth, Jessica’s sister, more which I liked. She isn’t a midnighter and I was convinced that something was gunna happen to her throughout a lot of this book, but as I always find with Scott Westerfeld; it wasn’t as predictable as I expected!
You also get a feel for the history of the “lore” as Rex calls it, and you get to learn more about how special Bixby is. That was something I really enjoyed cos the whole way through the first book I was questioning why Bixby was the only place the blue hour happened. I’m glad my questions were answered, but Touching Darkness also let other questions unanswered so I can’t wait to get my hands on the third to answer those!
I didn’t get into the book as much as I’d hoped to be honest, I loved it but I think there was something amiss, I don’t quite know what it is but I think it might have something to do with the change of character in Melissa and maybe her and Dess’ relationship. In the first of the series you got a bit of how Dess felt about the other midnighters and this is built on in Touching Darkness and I don’t think I liked how it was handled. But I am hoping that the third, Blue Moon, will fix that for me, as I am going to the library at the weekend to get them to order that on in for me too!!
Touching Darkness is the second in The Midnighters series. It was published in 2006 by Atom.

A Witch in Love – Ruth Warburton