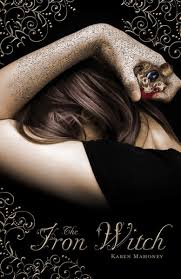 “My father died saving my life when I was seven years old.
I wish I found it easier to remember him outside of my dreams – where of course he is tall and handsome, and over and over again saves me from the Wood Monster.”
Donna is an outsider. Her parents were alchemists, and part of the Order of the Dragon, a group which Donna is expected to become as soon as she is of age. When she was seven years old her father died saving her live and her mother was affected, by some form of curse, so badly that she barely remembers who Donna is.  In the same incident Donna lost use of her arms, having to get them magically enhanced with iron tattoos.
When Donnas best friend, Navin, and the man who made her arms, Maker, get abducted and wood elves are using glamour so that people don’t notice, Donna has to do something, and who else better to help her than the incredible mysterious Xan.
***
I have been meaning to read The Iron Witch for ages, so I couldn’t believe my luck when Cicely from Ciclovesbooks said she had a spare copy up for grabs! (Thanks again Cicely!) I knew I had to read it as soon as possible so I got to it straight away, unfortunately a lot happened the weekend I had set aside for reading it and instead of the usual 2 days it would take to read a book of this size it took me nearly 5!
I did love the story of this book, it was really well written and the pace of the plot was brilliant. I love the insights you get from Donnas journal about her past and how much love she has for her family and for Navin. The main part of the story was told in third person from Donnas perspective but I think those journal entries really made me get to know the character more.
As with a lot of faerie books there are common themes, about tithes and the fey world being split up into solitary and non-solitary fey, but I loved the idea that the faeries had gone back into their world, not to come back again. It was a bit of a new take on the faerie books and it made it have a nice twist.
The characters didn’t quite engage with me that much. I loved Xan but I think he came across a bit odd in the first couple of exchanges with Donna, like perhaps he wasn’t to be trusted. It took a while for me to actually trust him. Navin was great, being able to laugh and joke in the hardest of times, he’s a friend we all need around at times like that. And as for Donna herself, she was ok but I think I mightn’t have liked her as much if it wasn’t for those personal snippets mentioned.
The only downside of this book was the over mention of how many days had gone past. I didn’t really like that the narration pointed out “was it only last night?” a couple of times. The story was good enough that I could remember that it was only last night myself, it kinda bugged me a little.
The Iron Witch was a good book, it grabbed me and made me want to read, it kept up the fast paced action for the most part but some little bits were slightly boring and slow. I can’t wait to see what Karen Mahoney has for us next as I definitely think she’s a one to watch!
The Iron Witch was published by Corgi in January 2011. It is the first of what will be the Iron Witch trilogy, with the second due for release in February 2012.