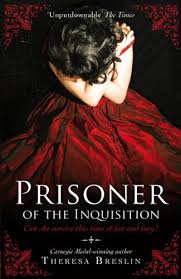 “We did not see the man who followed behind us.
For in the summer of 1490, before the Holy Inquisition brought fear and suspicion to our town, I did not glance constantly around me when I went about my business. After all, I was Zarita, daughter of a rich and powerful magistrate, and I could go where I chose. And on that day in August, a day so hot that even the cats had slunk from the sun to shade to find some coolness, I was escorted by Ramon Salazar, a handsome young nobleman who had declared he would die for love of me.”
Zarita didn’t know that that hot summer’s day of August 1490 would stay with her for the rest of her life. After a beggar tries to take money from her purse inside the church in which she is praying for the recovery of her ill mother Zarita claims he assaulted her and he is sentenced to death by hanging. His son Saulo, similar age to Zarita witnessed the events and is bound by the soldiers onto a ship, sold as a slave after Zarita pleas for him not to be hung like his father. On that day Zarita loses her mother and Saulo loses his father. The latter swears revenge on Zarita’s family as she falls into mourning mixed with severe guilt.
For Eighteen months the two go their separate ways and their lives change drastically. But they are destined to meet again and Saulo promises to have his revenge.
Prisoner of the Inquisition is not normally a book I would pick up so I was a bit wary when I was asked to review it. I don’t usually fair well with historic books and I know nothing of the Spanish Inquisition (History really isn’t my strong point!) However I really do think this book was so well written that it didn’t matter that I knew nothing of the history. A background was weaved into the story very well which meant I picked up enough to understand the story.
At first I hated Zarita. I couldn’t believe that someone could be so up themselves to lie about a man touching her and get him hung for it. She was childish and selfish but this actually changed quite soon, although I was wary of her for a while. I loved Saulo though, his adventures on Captain Cosimo’s boat was definitely my favourite part of this story. His love for the sea came out so well in the story that I was begging for him to have a happy life on a boat by the end of it! (I won’t give anything away though; you will have to find out what happened at the end yourself!)
One of my favourite forms of voice for a book is split narrative, especially when it’s done well. In Prisoner of the Inquisition it’s definitely done well, we go through events from Zarita to Saulo, and back again. It was done really well with events when both are present were quite often covered from both perspectives. I liked that, it made me get to know the characters so much better and by the end of the book I really did love these characters!
I always know if a book is going to be good by how much I engage with the characters. If I feel strongly enough to laugh when they laugh, to cry when they cry or to shout at them when they are being utter arses then I know I love the book. This was one of those books, my favourite character was Saulo closely followed by Zarita’s Aunt and Captain Cruiso Cosimo. It’s very rare that I actually HATE a character but seriously… I would have LOVED to see Father Besian die a slow and painful death! (I’m not horrible I promise, he just deserves it!)
I don’t know how close the story was kept to the true events of the time but I was horrified and shocked by what was happening at the time. I’m guessing it was kept close to the truth so the events really got my emotions pumped. I couldn’t believe that the prisoners of the Holy Inquisition were actually sometimes burnt alive at the stake with the wood dampened so it lasted longer. I can’t believe that people weren’t allowed to live together in harmony because they were of different faiths. It’s wrong and it’s stuff like this which makes me glad I am living in this time and not that!
I would really recommend this book to anyone. It’s amazingly written, a real eye-opener and a history lesson which was far from boring. I was fascinated to learn the events of the time and the action and suspense definitely had my attention grabbed from the start. I quite literally couldn’t put this book down!
Prisoner of the Inquisition was released in March 2011. It has been nominated and shortlisted for many awards including the Carnegie Medal.

The Power of Six – Pittacus Lore

Dying to Know You – Aidan Chambers