On My Wishlist is a wonderful weekly meme from Book Chick City in which we drool over the books on our wishlist that we may not get to buy for a while!

Another week another round of my ever-growing wishlist to show off… first up is an awesome sounding book that I have heard so many good things about!! 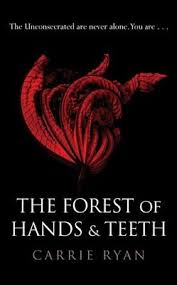 The Forest Of Hands and Teeth – Carrie Ryan
March 2010 (Gollancz – Orion)
Goodreads summary:
In Mary’s world there are simple truths. The Sisterhood always knows best. The Guardians will protect and serve. The Unconsecrated will never relent. And you must always mind the fence that surrounds the village; the fence that protects the village from the Forest of Hands and Teeth. But, slowly, Mary’s truths are failing her. She’s learning things she never wanted to know about the Sisterhood and its secrets, and the Guardians and their power, and about the Unconsecrated and their relentlessness. When the fence is breached and her world is thrown into chaos, she must choose between her village and her future—between the one she loves and the one who loves her. And she must face the truth about the Forest of Hands and Teeth. Could there be life outside a world surrounded in so much death?
***
Then we have this fantastic and intriguing story…

XVI – Julia Karr
January 2011 (Speak)
Goodreads summary:
Nina Oberon’s life is pretty normal: she hangs out with her best friend, Sandy, and their crew, goes to school, plays with her little sister, Dee. But Nina is 15. And like all girls she’ll receive a Governing Council-ordered tattoo on her 16th birthday. XVI. Those three letters will be branded on her wrist, announcing to all the world-even the most predatory of men-that she is ready for sex. Considered easy prey by some, portrayed by the Media as sluts who ask for attacks, becoming a “sex-teen” is Nina’s worst fear. That is, until right before her birthday, when Nina’s mom is brutally attacked. With her dying breaths, she reveals to Nina a shocking truth about her past-one that destroys everything Nina thought she knew. Now, alone but for her sister, Nina must try to discover who she really is, all the while staying one step ahead of her mother’s killer
***
And finally, one that I was reminded I wanted  through someone’s IMM last week (I cant remember who… sorry!)

Twenty boy Summer – Sarah Ockler
June 2010 (Little, brown)
Goodreads Summary:
“Don’t worry, Anna. I’ll tell her, okay? Just let me think about the best way to do it.”
“Okay.”
“Promise me? Promise you won’t say anything?”
“Don’t worry.” I laughed. “It’s our secret, right?”
According to her best friend Frankie, twenty days in ZanzibarBay is the perfect opportunity to have a summer fling, and if they meet one boy ever day, there’s a pretty good chance Anna will find her first summer romance. Anna lightheartedly agrees to the game, but there’s something she hasn’t told Frankie—-she’s already had that kind of romance, and it was with Frankie’s older brother, Matt, just before his tragic death one year ago.
Beautifully written and emotionally honest, this is a debut novel that explores what it truly means to love someone and what it means to grieve, and ultimately, how to make the most of every single moment this world has to offer.
***
So what’s on your wishlist?