On my wishlist is a weekly meme brought to you by Book Chick City. Its a fantastic way of hearing all about the books that are on peoples ever growing wishlists! please visit Book Chick City’s blog here to find out more! 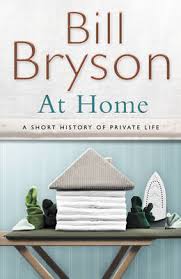 I’m an uber geek, thought you should know…
At Home: A Short History Of Private Life – Bill Bryson
May 2010 (Doubleday)
Goodreads:
“‘Houses aren’t refuges from history. They are where history ends up.’

Bill Bryson and his family live in a Victorian parsonage in a part of England where nothing of any great significance has
happened since the Romans decamped. Yet one day, he began to consider how very little he knew about the ordinary things of life as he found it in that comfortable home. To remedy this, he formed the idea of journeying about his house from room to room to “write a history of the world without leaving home.” The bathroom provides the occasion for a history of hygiene; the bedroom, sex, death, and sleep; the kitchen, nutrition and the spice trade; and so on, as Bryson shows how each has fig­ured in the evolution of private life. Whatever happens in the world, he demonstrates, ends up in our house, in the paint and the pipes and the pillows and every item of furniture.”

I heard about this one on the radio last year when it first came out in hardback and still haven’t gotten round to getting it!
The Poison Tree – Erin Kelly
May 2011 (Hodder)
Goodreads:
“It is the sweltering summer of 1997, and Karen is a strait-laced, straight-A university student. When she meets the impossibly glamorous Biba, a bohemian orphan who lives in a crumbling old mansion in Highgate with her enigmatic brother Rex, she is soon drawn into their world – but something terrible is about to happen, and someone’s going to end up dead . . .”
***

I really want to see the movie of this and I point blank refuse to watch the movie before I read the book!
Whip It – Shauna Cross
September 2009 (Macmillan US)
Goodreads:
“Skirts, Skates, & Scrapes!
All the old school skills with a new punk rock attitude
Come see The Lone Star Derby Girls
Austin’s All-Girl Roller Derby League
The Holy Rollers vs. The Fight Crew
Halftime Concert by the Chimney Sweeps
This ain’t no cheerleading clinic, y’all!
Meet Bliss Cavendar, an indie-rock-loving misfit stuck in the tiny town of Bodeen, Texas. Her pageant-addicted mother expects her to compete for the coveted Miss Bluebonnet crown, but Bliss would rather feast on roaches than be subjected to such rhinestone tyranny.
Bliss’s escape? Roller Derby.
When she discovers a league in nearby Austin, Bliss embarks on an epic journey full of hilarious tattooed girls, delicious boys in bands, and a few not-so-awesome realities even the most hard-core derby chick has to learn.”
***

Now a more recent one! I love the sound of this anthology and I cant wait to read it at all!
Truth and Dare – edited by Liz Miles
26 May 2011 (Constable and Robinson)
Goodreads:
“The truth is that for those who dare to be different school and growing up can be hell. “Truth & Dare” is a collection of edgy, quirky stories that revolve around a funny, nerdy cast of characters who struggle to fit in …or struggle not to. They will appeal to the inner geek of anyone caught up in attempts to navigate the labyrinthine teen caste system. Written in authentic teen voices, they speak to fans of the movies “Juno” and “Nick and Nora’s Infinite Playlist” and the TV series “The Gilmore Girls.” Witty and smart, these are short stories from the point of view of funny, though not always cool or popular guys and girls, who are dealing with all the pressures of growing up – school, friends, music, relationships, parents, and just plain fitting in (or not)”

Dying to Know You – Aidan Chambers