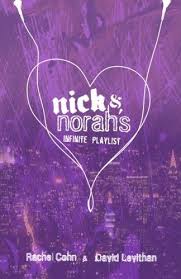 “The day begins in the middle of the night. I am not paying attention to anything but the bass in my hand, the noise in my ears. Dev is screaming, Thom is flailing, and I am the clock-work, I am the one who takes this thing called music and lines it up with this thing called time.”
Nick is the nonqueer bassist in a queercore band. The band is rocking the crowd at a gig when he realises that his ex is there in the crowd. He nearly loses it but gets it back just in time for the end of the set. But then; shes coming; he’s Panicking and he asks the girl next to him to be his girlfriend for the next five minutes.
Norah is alone as her best friend clings drunkenly to a band guy. Pissed off she barely even registers that the guy next to her until hes asking her to be his girlfriend for the next five minutes. And she thinks “why not?!” its not until Tris walks up to them and asks how they know each other that she realises that the guy is Nick. The same Nick that Tris had been treating like crap for the previous 6 months. The same Nick who made amazing mix CD’s and wrote beautiful songs.
Five minutes turns into a good few hours when Norah needs to get away from her own evil ex and that own night changes things for the both of them. Talking about everything from music to religion they start creating their own infinite playlist.
***
I watched Nick and Norah’s Infinite Playlist – the movie, before I read the book, which is something I rarely do. However I didn’t realise before I watched it that it was a movie and when it came up on the credits I knew I’d have to read the book at some point. So when I read about Chicklish’s NYC reading challenge I knew I finally had an excuse to buy the book! (Like I wouldn’t have any way!)
I expected this one to be a quick read at 183 pages but it actually wasn’t at all. I don’t know if it was me being slow or the events in the book which needed careful thought but something made me read this one a bit slowly. I think it’s probably because I really liked the characters and I wanted to actually engross myself into their feelings and understand everything that was buzzing around their heads.
I love the story but to be honest I don’t think it would work if it wasn’t for the setting. I mean, New York is one of those cities where you can do anything and everything right? And the phone call that Norah gets from her dad at half four in the morning… let’s just say that my dad would totally NOT act like that if I was wandering the streets with a guy I just met!
Other than the totally out –there-ness of the story it was fantastic. What else do you need other than someone else in the same situation to make you realise that your ex was a totally douche and what the two of you had wasn’t love at all, it was them using you and kicking you to the kerb. It was a beautiful love story with music and laughs thrown into the mix and that is totally my type of love story!
The characters in this book were really interesting… I got so involved with Nick and Norah that I knew and loved them by the end. I wanted them to have a happy ever after and damnit they deserved to be together as they were absolutely made for each other!! The other smaller characters were fantastic too, even Tris – though I could tell she was a total bitch! And don’t get me started with Nick’s bandmates and the Taxi-driver! He was amazing! I also loved the way that the whole gay scene was just there in this book, it wasn’t made a deal of or anything, other than the questioning from Norah about Nicks sexuality, and I liked that.
I couldn’t not love this book, it’s got romance, music and band boys in it and that’s like three of my favourite things! It wasn’t as mind-blowingly amazing as I hoped it would be but I kinda put a lot of pressure on this book as I loved the movie! It’s definitely one I’ll be reading again though as I thought the two authors worked really well together and I will also be checking out other books they have worked on.
Nick and Norah’s Infinite Playlist was published in 2007 by Knopf, a Random House imprint. It was the first in the Cohn and Leviathan collaboration. My copy was purchased through Amazon Marketplace.
Goodreads | Amazon