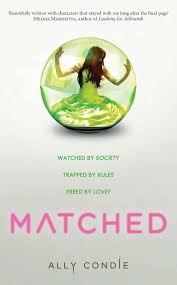 On her seventeenth birthday, Cassia meets her match. Society dictates he is her perfect partner for life. Except he’s not.
In Cassia’s society Officials decide who people love.
How many children they have.
Where they work.
When they die.
But as Cassia finds herself falling in love with another boy, he is determined to make some choices of her own.
And that’s when her whole world begins to unravel.
*This review may contain some slight spoilers*
Cassia gets her match on the day of her seventeenth birthday. She panics when the screen goes dark and stays dark; it means her match is in the same banquet as she is. It means she might know him. The panic quickly fades when the boy who is announced as her match is her best friend, Xander. No one could be happier than their families, the relief that they know who their children are matched with and how happy they should be. Cassia herself is excited and happy that she is paired with someone she already loves, her match is perfect.
Then, when Cassia goes to view Xanders microcard, telling her all there is to know about the matching process and Xander himself, something happens. Xanders face is there looking out at her from the portscreen, then all of a sudden it goes and is replaced by another boys face; another boy she’s not allowed to have.
As the days go by Cassia finds herself around the forbidden boy more and more, finding out too much about his life, getting to know him too well, growing more and more interested in him.
Matched

is a story of forbidden love. In a society that tells you your job, your partner, how many children to have, where to live and even when to die, it’s not difficult to find yourself in situations that are forbidden if you’re not careful.
The world is set in our future, you can see pieces of our present day world within this one – it’s closer to our world than many of the other dystopian novels I’ve read recently but I think this is one reason why I wasn’t keen. I couldn’t pinpoint what had happened for the world to change to how it is in Cassia’s time. I guess the world also really annoyed me because they had the stuff from the past; books, poems, paintings, music, things that make us human, but they weren’t allowed and as far as I could tell this was just so that everyone was uniform, it was like people were just robots.
I also didn’t like the way Cassia falls for Ky, her forbidden love, it seemed kind of forced. She had just found out that she was matched with Xander and already loved him but then as soon as she saw Ky’s face she was in love with him. I guess it probably caught her off guard as she didn’t really expect to be matched with Xander but I think there is more to the fact Ky’s face appeared than the story lets on, maybe something we’ll find out about in the next book…
I’m not going to focus on the negatives too much. There was a lot I liked about Matched; I liked the characters, the way they were flowed so well together. Cassia’s family especially, I liked her grandfather especially, and the way her parents do just seem so perfect for each other.
I also liked the way that people seemed to be aware of what was going on around them, and how its not right, things are wrong with the way the officials run the world but its better than what could be happening so people let the officials do what they ‘need to’.
Matched is really well written and you do get a feel for the characters. The love that Cassia’s father and mother have for each other really comes through even though there’s nothing from their perspective. The families too appear to be so well put together even though the people are practically forced to be together. They are, usually, matched correctly. However Matched didn’t excite me as much as I hoped, towards the end things got a lot better for me but then the very last chapter kind of disappointed me. I preferred the ending of the one before! I often think a good book is one where you lose time just because you’re reading and you can lose yourself within the pages and unfortunately Matched didn’t really do that for me. I will probably keep an eye out for Crossed, the second book, later this year but I doubt I’ll be running out for it on release day, Matched didn’t excite me enough for that!

Rebel of the Sands – Alwyn Hamilton