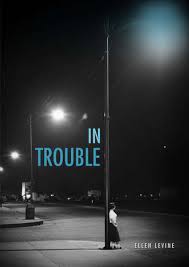 “Run, RUN!
Behind me. A lengthening shadow. I see the shadows edge.
I duck in a doorway and look back.
HIM!
Smirking.
I try to close my eyes but they will not shut.
Run, RUN!”
Jamie is 16, living in the mid-50’s, she understands that girls who give it up are “loose,” “sluts” or “easy.” So she doesn’t understand when Elaine, her best friend who had moved away a year or so ago, tells her that she’s been sleeping with her boyfriend who “loves her.” Jamie knows that Neil is a no good loser and her friend is in trouble, but she can’t get her friend to see what she means. Jamie tries to get help from her cousin Lois but Elaine won’t listen, she wants her baby because she thinks that Neil will come and marry her and they’ll be a family.
Jamie is smart. She knows what Neil’s like and she knows that it’s no life to be 16 and pregnant. But what can you do when abortion is illegal? Jamie thinks her friends in trouble but it’s nothing compared to what’s about to happen.
***
In trouble is a moving story about growing up in 50’s America. Life is hard, women aren’t overly powerful but they are allowed to work and provide for the family. But teen pregnancies are a huge taboo, and there are many “homes” which girls get sent to, to have their babies and give them up for adoption.
I never even thought about the difference in times between now and when this book is set when I saw it on netgalley. I thought that it sounded interesting but I think I struggled a bit because times have changed so much since then, especially in England. But as Levine mentions in her editor’s note at the end there are some restrictions even now for girls under 18 who want abortions.
Even with the severe difference in society and laws between now and then I did enjoy this book. It was a very quick read at something like 200 pages but it was by no means an easy one. A lot of issues are dealt with in that short space but it never felt rushed either. I did expect a bit more action when I read the opening lines, but it wasn’t action packed at all, except in the thoughts of Jamie.  As the whole story is told in Jamie’s voice you get to know her very well, you understand her, and her family. She is a strong, caring girl and I just wanted to help her throughout the whole book. She had to deal with a lot of things that a 16 year old girl shouldn’t have to go through!
I did really enjoy this book but something was slightly missing. I think its because I couldn’t fully relate with the time in which it was based. I couldn’t get my head around the stupidity of Elaine either, I really didn’t like her, she was away in the clouds most of the time and very selfish! I think some readers will find it difficult to engage with the story to be honest. I did and I think if I was reading this when I was a teenager I probably wouldn’t have finished. I wanted to know where the story was going but it didn’t grab me completely.
Ellen Levine has written numerous books for young adults. In Trouble is due for release in September from Carolrhoda Group [US]

After the Snow – SD Crockett