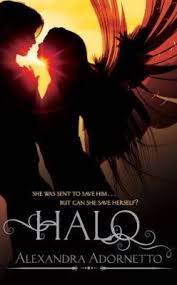 “Our arrival didn’t exactly go as planned. I remember it was almost dawn when we landed because the streetlights were still on. We had hoped our descent would go unnoticed, which it mainly did, save for a thirteen year old boy doing a paper round.”
Bethany is an angel, sent with her brother, Gabriel, and her sister, Ivy, to help to small backwater town of Venus Cove from evil doings. Bethany is a young angel, created only 17 “mortal years ago” and she adjusts to human life quickly, a lot quicker than her or her siblings imagined. She enrols at the local school and soon starts getting to know the schools most unobtainable boy, Xavier Woods. Something about Bethany suddenly makes Xavier unobtainable and the pair find themselves falling in love. But what will this mean for Bethany, especially when the strange happenings grow stranger.
***
Ok first of all… I was very mixed about this book. There are things I loved and things I hated. To be honest, the things I hated probably would have made me put the book down had they not been matched with the things I loved.
I’m gunna start with the negative, I think its best to get it out the way first then concentrate on what was awesome! I hated Bethany. I think she was a spineless, selfish, annoying character. I didn’t want anything bad to happen to her but at the same time, ergh. She was sent to earth to help and she pretty much threw that away as soon as she started school. She practically forgot about her “angel-ness” and became a very annoying little brat. She didn’t have a backbone at all, not to me anyway. I hated the way that Xavier “protected her” and all that, I mean ergh, protect yourself! *feminism ftw!* I honestly think that Bethany’s character would have made me stop reading if it wasn’t for the story, the other characters and the totally amazing writing! It was a bit strange however that as it was written in first person from Bethany’s perspective I kinda fell in love with her voice but not her! It freaked me out because I wanted to like her but then she’d do something to make me not but everything was coming from her!
The other thing that I wasn’t impressed with was the size of the book, at 480 odd pages I would expect a lot more stuff to happen than what did. I think the book probably could have been just as powerful if it wasn’t as long because I found myself a little bored at times then the “finale” scene kinda felt a bit rushed (considering the size of the book itself!)
Right! Horrible stuff aside! What shall I start with!? Xavier? Phawor! Hes a hottie, and he has a great sense of humour. I think personally I would have gone for John as I have a thing for the dark brooding type of guy but I loved Xaviers sense of humour and his attitude and his love for Bethany, while it was a bit bloody ergh at times, was really sincere.
Then the story; it was really interesting, I kept going because I needed to know what was going on, it gripped me, but as with many series’ not all the questions are answered! I never got sick of the storyline, even if the pace was a little off for me, I loved the plot and the way that it threw me off when I thought I’d guessed something!
Then last but not least at all. My favourite part of this book had to be the writing! It hit you from the very beginning and didn’t let you go. I couldn’t believe that what I was reading was written by an 18 year old! It’s crazy. I wish I wrote like that now, let alone back then!! I’m in awe of Alexandra’s writing style and her amazing capability with words. I think that no matter how good the story and other characters were, with my loathing of Bethany I probably would have put this book down, if it wasn’t for the writing! Seriously I couldn’t put it down because of the way it’s written! The descriptions, the vocab, the feel of the words running through your head as you read them; it was INCREDIBLE! Ten out of ten for it!
I really wanted to love this book. I really did! Everything but the main character was near perfect but she put me off a bit. I am going to read the other in the series, but I probably won’t rush out for them! However I’m really gunna have to try and get my hands on some of Alexandra Adornetto’s other stories, see what her other characters are like!! I would recommend it to other people purely because of the writing, and to be honest other people mightn’t take to Bethany like I did, they may like her because some bits of her personality were really good.
Halo is the first of the series and was released in the UK in January 2011. The second, Hades, is due for release towards the end of the year.