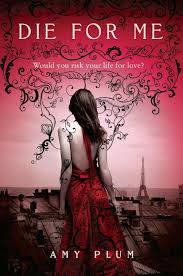 “My parents had died in a car accident just ten days after I got my driver’s license. A week later, on Christmas day, my sister, Georgia, decided that the two of us would leave America to live with our father’s parents in France. I was still too shell shocked to put up a fight.
We moved in January. No one expected us to go back to school right away. So we just passed the days trying to cope in our own desperate ways. My sister frantically blocked her sorrow by going out every night with the friends she had made during our summer visits. I turned into an agoraphobic mess.”
Kate is devastated by the loss of her parents. She spends her time cooped up inside with her head in a book until one day her sister finally tells her she has to get out of the house, even if it’s to read outside in one of Paris’ artsy cafes. Kate agrees and starts frequenting a local café, getting to know the owner and other frequent visitors. One day a group of boys catches her eye, a group of very handsome boys, and from that moment on Kate seems to bump into them more often than she’d like at first. Vincent, one of the handsome boys, talks to her on a couple of their chance meetings and Kate just can’t help herself get drawn to him. She ends up spending more time with him, and soon realises that not everything is what it seems, including Vincent himself.
Let me begin by saying that Die For Me was one of my most anticipated books of 2011. I have been longing to get my hands on a copy since I first heard about it because it sounded so magical and let me tell you, it does not disappoint!
Kate is obviously going through a tough time. Having just lost her parents it’s not hard to understand why she just wants to curl up and pretty much disappear. But Vincent will not let her do that, from their very first meeting he knows that she is special, he knows that he has to get to know her.
Die For Me is totally action packed. Without giving away too much of the story you get sword fighting, knife throwing, kick ass action scenes. With quite a bit of half-naked boy thrown in there too; which obviously isn’t something to complain about!
I am not a fast reader and a book of this size, 345 pages, would usually take me a few days if I’m at work. However because of the writing and the amazing descriptive scenes within Die For Me I lost myself completely in this book. I had 155 pages left when I got home from work on Monday night and read them in about an hour and a half, which is ridiculously fast for me. I just couldn’t put it down! I found myself totally inside the narrative! It was brilliant!
I loved Kate’s character, she had a lot going for her and she really did need something or someone to get her out of the pain of losing her parents. I also loved Kate’s Papy… even though you barely saw much of him I hope he will be around a lot more in the next couple of books cos I think he is cool! And her Mamie was awesome too. They really were a rock for her to anchor herself with following her parents’ death.
I can’t go into much detail of the plot without giving a lot away. So basically I’ll say this: Die For Me is a fantastically written, action packed, paranormal romance and you will love this book even if paranormal fiction isn’t your thing. I will be urging EVERYONE to read it!
Die for Me

is Amy Plum’s first novel. It will be released in the UK on May 5th by Atom books. It is the first part in the Revenants series, of which book two is due to follow during May of 2012. I also have to say a huge thank you to the wonderful Keris Stainton for sending me her copy to read and review! 😀