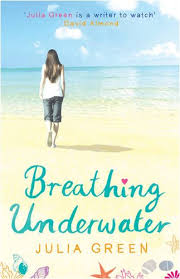 “It starts like this; a sudden storm. Squalls of rain batter my bedroom window, rattling the glass. A shrieking wind shakes the roof slates on the small stone house. A loose slate breaks free, slides and spins down the roof, shatters into tiny pieces on the path below.”
Freya returns to her grandparents’ house on the tiny island of St Ailla for the first summer since her brother died there in a terrible accident a year ago. She has not gotten over the lose of her brother and fears for the state of her parents relationship as her mother is handling the loss of her eldest child terribly. When she arrives on the island Freya cant help but feel like her borthers presence is around her, watching her, even speaking to her. And fresh questions buzz around in her head about what actually happened that last summer.
Breathing Underwater was incredibly touching and oh so beautifully written. I honestly couldn’t put it down and whilst it was a quick read I felt in no way like it was rushed or didn’t grab at my emotions. The loss that Freya feels for her brother is heart wrenching. She doesn’t know how to handle her grief and because of the way her mother is handling their loss Freya doesn’t feel like she has anyone to talk to.
I loved the way this book was written just made it for me. I remembered when I started reading it that I’d actually read Blue Moon by the same author years ago, (I’m talking like 2004 probably!) and I remember loving that because of the description and writing. You can see from the extract above that the words just flow so well and whilst this is only the first chapter, nothng is lost as the story goes on.
I felt for Freya, so much, I wanted to grab her and give her a huge hug because she was hurting so badly. In fact I wanted tograb her whole family and hug them. They were so wonderful, her grandma was awesome, just exactly the type of grandma youd want when awful things were going on in your life… I mean, she was even called by her first name rather than grandma! How cool!?? I loved the sense of community on the island too, even from the kids who were there just as visitors to the campsite; it was a true holiday atmosphere.
Freya really grows in this book, she comes across younger when shes thinking back to the year before and you can tell that the death of her brother has hit her hard and made her grow up fast. But even at the beginning of this story you can tell she still has a lot of gowing up to do and you can really see that happening throughout the book.
I loved this as a summer read, it’s not by any means a light and floaty read but it’s definitely one for the beach. The grief is handled very well and I think had it been set in any other season it would have been depressing rather than heartfelt.
After reading this book I really want to go back to Blue Moon and its sequel which I never got round to, Baby Blue. I love the way Green writes and how much thought is put into her characterisation. In Breathing Underwater for example Izzy is such a minor character, she helps Freya through her grief but there was so much depth to her whereas in other books that type of character would be a lot less developed. I really would recommend Breathing Underwater to anyone and I will definitely be reading more Julia Green in the future.
Breathing Underwater is Julia Greens fourth book for Young Adults, it was released by Bloomsbury in May 2009.

Petals in the Ashes – Mary Hooper